Stevie Becks is ‘Falling For You’

Bigfishlittlefish songwriter and vocalist par-excellence Stevie Becks has collaborated with hed kandi resident DJ Carl Hanaghan and my digital enemy on ‘falling for you’. The track has been going down a storm all summer in ibiza (see youtube clip below) and will see release on discopolis records this winter.

In the meantime Sussex based Stevie Becks continues to write and collaborate with the upper echelons of the dance World. Expect big things!
Posted by Big Fish Little Fish Music at 13:53 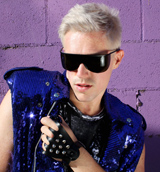 Mason's last single ‘Perfect Exceeder’ featuring Princess Superstar reached number 3 in the UK before achieving success across the globe. "This is a really special record and it's taken a long time to make. To get DMC to rhyme on a record is fantastic and to have someone of the calibre of Sam Sparro to drop in for a chorus makes it even better! The only downside has been the amount of paperwork!" said Steve B of Big Fish Little Fish Music.

Big fish little fish music are pleased to be working with the penguin cafe orchestra on a remix project of classics from the groundbreaking composer simon jeffes. The success of 'paddy's revenge' which borrowed from the PCO's 'Music from a found harmonium' has garnered a new wave of interest in the band's output. Big Fish Little Fish are currently talking to numerous heavyweight producers and djs to create an album of down tempo interpretations of some of the Ochestra's classics.
Posted by Big Fish Little Fish Music at 13:51

Brighton based downtempo act atalanta is featured on several compilations in the UK and spain for the summer and is gaining massive plaudits accross the industry. Tracks feature on hitmusic's 'cafe zen' and blanco y negro's 'chillout Vol. 7" and "guitarra chillout".

The debut album, 'blue tears' has just been finished and is available for licensing worldwide.
Posted by Big Fish Little Fish Music at 13:50

The Wimbledon based company needed a replacement track for Frank Sinatra's vesrion of Cole Porter's classic song 'I've Got You Under My Skin'.