Mason's 'Rhino' is Radio 1's "Hottest Record In The World"

Its very early days for Mason's horn heavy track 'Rhino' but it has already earned the accolade of "The Hottest Record In The World" on Radio 1. 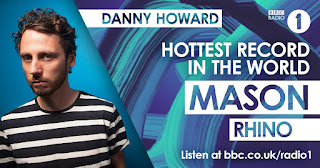 The upcoming release on Defected was chosen by Danny Howard as the biggest record for his show at the weekend. It received six more plays over the national station thereafter.

The week before had Mason playing a 6o minute guest slot on the legendary Annie Nightingale's Radio 1 show which featured no less then eight new tracks from the Dutch producer.

'Rhino' will see a full release across all portals on May 12th.