Dutch uber producer has just released his sophomore outing on the legendary Island Records. The single, which features hot UK rappers The Manor is called 'Stop, Start, Slow, Fast' and is a typically quirky and original club banger. 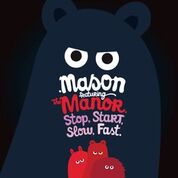 There has already been some nice radio play from the likes of BBC Radio 1 and 'Stop, Start, Slow, Fast' just debuted in the 'Cool Cuts' chart this week after some heavyweight DJ support out in the clubs.

The track features forthcoming remixes from Parx and Dirty Bird label stalwart ZDS which should be surfacing shortly.